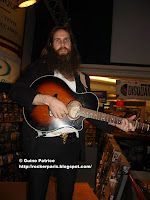 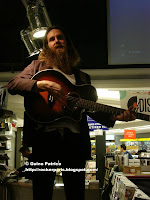 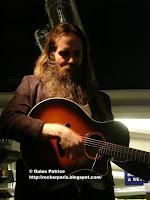 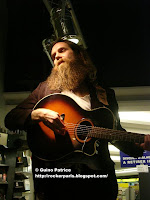 Folk Man Josh T Pearson is promoting the Record Store day, which is in fact tomorrow, by playing a showcase @ Gibert Musique Store in St Michel , the heart of the latin quarter of Paris.
It started 30 min late, he's a bit dodgy but nice, talking to people, he seems to be in his own world.
Hard to judge his music as he probably played the shortest showcase I have ever seen in my entire life of concerts as he only played 2 songs.
Sounds like Johnny Cash to me.
The songs he played were pretty short compare to what he's doing normally: 10 to 15 min long songs. He played later that night @ Café de la Danse in Bastille.
He then signed cds and EPs that were done specially for the record day.
Publié par Angelo Misterioso à l'adresse 1:11:00 AM