"Back and Forth" Foo Fighters' Documentary screening @ Canal+, Paris April 27 2011 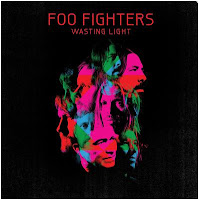 Screening for the press in a projection room at the Canal+ HQ.
James Doll did a documentary just in time for the released of the 7th Foo Fighters' studio album "Wasting Light" out this month.
All you wanted to know about Foo Fighters from the early beginning in 1994 when Kurt Cobain died to the recording process of the new album is in the documentary.
Lots of talking, a few things unknown to us and interesting facts from the beginning of the Foo, it's well done, there's also a bit a live footage but very few.
You won't see other musicians telling how great they are but as it's official there's no controversy regarding the HIV-Aids denialist movement that supported Nate Mendel or anything alse, it's only focus on the history of the band.
They did mention Dave playing with The QOTSA but NOT Them Crooked Vultures, Why ?
Really great, a must see.A good commercial for the new album.
It will be play on Canal+ on May 19 @ 11:55pm
Publié par Angelo Misterioso à l'adresse 9:40:00 PM