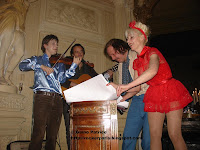 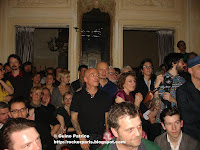 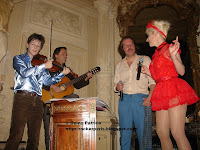 French lingerie designer Fifi Chachnil is playing a special gig with French singer Philippe Katerine in a very nice club in the red district of Pigalle in Paris.

The Carmen club is a beautiful hotel particulier from the French Second Empire (XIX Century) classified as "Historic Monument", George Bizet supposed to have wrote his famous opera "Carmen".It is also a former whore house.

We usely don't go to that kind of parties but 1) she's a lingerie designer 2) this is the fashion week 3) it's a concert so... we were expecting lots of girls in underwear, lots of models, lots of free drinks and food.
In fact we had... NOTHING ! 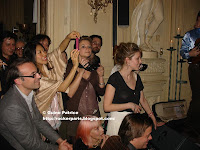 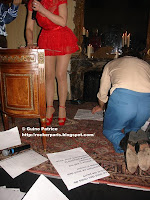 "Where are the fuckin' lyrics !"

It was a gig with Fifi singing and Philippe katerine helping out on vocals.
It's a trendy club so lots of sexy girls in the audience even though it's not obvious on the pics.
The music is pre-WW2 french songs style with funny lyrics, this was a bit surreal, well I mean completely surreal, very unrehearsed, they had the lyrics on sheets of paper but completely mixed them so it took them a while to get it back together.
As you can see the singer is a character and acted a lot on stage
Surreal but fun and we had a good time.
French actress Julie Depardieu (who was sitting next to our dear photographer) , she's the wife of singer Philippe Katerine. 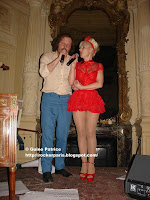 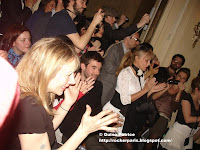 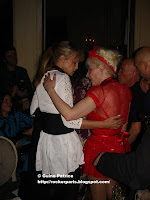 French photographers Pierre & Gilles were in the audience with Arielle Dombasle ( a failed french actress and singer but she has a rich and powerfull husband)
Entertaining.
Publié par Angelo Misterioso à l'adresse 12:33:00 AM