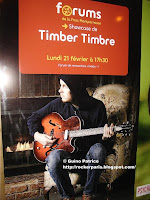 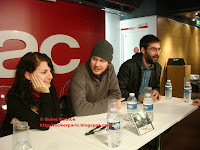 As we came into the Fnac Montparnasse, there wasn't any instrument on the stage but a table and a few chairs, so we guess that something was wrong.
In fact the band was tired after doing the soundcheck and didn't bother playing so they just signed their record and left after half an hour.