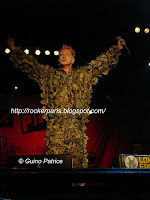 John here in 2008 with the Pistols in Belgium

As there's nothing happening right now in Paris ( Didn't go to Marilyn Manson yesterday) I thought I could update the site with some shit comin' in from other countries everyday.
Here it is from my mate Ray's gigs from old London town:

Only 3500 people out of 5000.
People with unused tickets for Brixton will gain entrance to the Electric Ballroom gigs which shows that this gig is far from being sold-out.

Here's a video from the show: "RISE":


In other news : Peter Doherty has been arrested for Heroin possession a couple of days ago in England.
Publié par Angelo Misterioso à l'adresse 5:18:00 PM