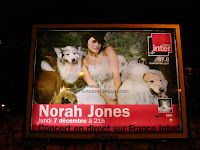 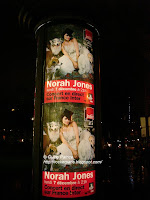 Billboards in front of Radio France

After going, yesterday to the shittest concert of the year with Devendra Banhart tonight we're going to see another artist playing soft songs : The lovely Norah Jones.

Lots of posh people & guests from France Inter & EMI as it's an invit' only private show in Studio 104 ( 1500 capacity ? ).
This show is broadcasted live on the France Inter radio, in a couple of days it should be in streamin on the website.

Conditions are perfect once again at Radio France ( Black Sessions are also here in a smaller studio ) as we are seated in confortable red sofas like in a movie theatre. 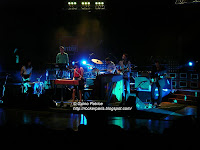 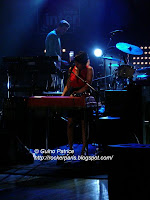 9:00 Pm Norah Jones and her new band is making her way on stage.
Don't expect jazz this time as she's playing lots of songs from her new cd, to be out shortly.
It's much more 'rock'. Well it's pop-rock with some country influences.
First , she's now playing the guitar , she's not that good , only playing simple rythm ( a bit like Madonna) but she's not that bad either.
The voice is ... you know her voice : warm , soft and... strong when it needs too & always a gem.
And she's very sexy in high heels, black dress, red top and short hair.

She's standing up most of the time on guitar or on electric piano playing soft rock mid-tempo songs some a bit country others a bit jazz.

Even when she's seating down at the piano on her own for a couple of " western songs" it's not a grand piano but an upright-piano.
She did two covers ( see complete setlist below ) one by Tom Waits and one by Wilco and she didn't forget to play " come away with me" to the audience delight.

Very good 90 min set.
After show party at the bar upstairs but we didn't go ( in fact we were not invited this time ). 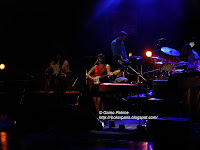 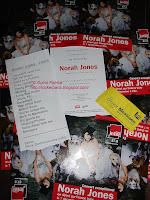