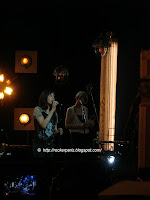 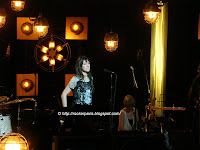 Couldn't miss this one as it's the last Album de la Semaine for 2009 and it's the first ever show performed by Charlotte Gainsbourg.
I arrived there late as I was at an Oliver Peel session and I missed the first song of this gig (It was ok as she played it again at the end ).
Charlotte Gainsbourg released a couple of years ago a very good first album , the new single IRM from the new album sounds good but I'm not too sure if having Beck doing the music is a good idea, I'm not a fan of Beck's music.
Her ( very) soft voice suited the music perfectly for the first record but not really for the kind of music she's doing now.
Her voice is very weak and she doesn't seem to enjoy beeing on a stage. 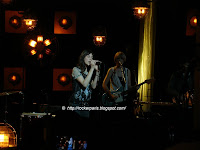 It is not bad and I quite enjoy this gig but let's be honest and we are always honest here at ROCKERPARIS.
Without the name Gainsbourg she would have never been signed by a record Cie.
Let's also be fair that was her FIRST concert and she was probably scared to death.

Broadcasted on Dec 23rd on Canal+
Unfortunately Beck couldn't make it , he called sick ; they were supposed to play 2 songs together.
Next time ? ( Dec 14th @ Grand Journal ? ) 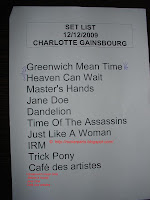 Ps : Thanks to the Misterious man who provided us with the Pics as Patrice, our photographer forgot his camera at Oliver's.
Publié par Angelo Misterioso à l'adresse 12:11:00 PM