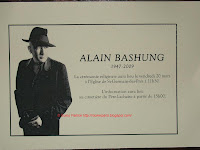 A couple of friends and I , went to Alain' s funeral @ Pere Lachaise ( where is buried Jim Morrison ) in Paris.
Ceremony was around 3 PM, of course they were many people outside the perimeter around his grave in one of the beautiful spot and "old " part of this famous French cemetery.
We had a quick chat with some people from his entourage.
French artists Yves Simon , Daniel Darc , Rachid Tahah , Christophe & Rodolph Burger were there + family & people who worked with Alain Bashung these last few years.
We left a white flower on the casket before they closed and sealed the grave and opened the ceremony to the general public.
R.I.P.
Publié par Angelo Misterioso à l'adresse 6:18:00 PM