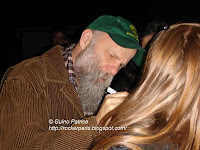 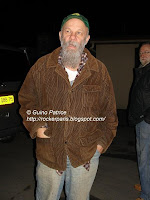 Seasick Steve @ L' Album de la semaine Canal+
For the last 2-3 years Steve is the media darling specially in England where he has played many times over the last couple of years including a sold-out Royal albert Hall and recently a sold-out Hammersmith Apollo..
Tonight he's not playing in front of 5 000 people but only 150 for this french TV show, but don't worry he's giving it all.
The ol' man might be seating down for most of this short gig but his blues-rock is quite powerful and the way he plays is very communicative , the fact that most of the songs are up-tempo is also very helpful , there's a drummer with him too.
He asks a young girl to sit down next to him while he was serenading her for one of the few slow song that he performed tonight ( " Walking Man " ).
After seeing him tonight I understand why he's so popular in England , his blues is very lively and the guy plays it with such a big smile on his face that's it's hard not to fell for him. 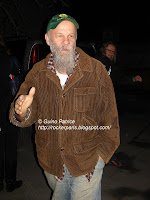 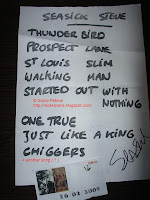 Steve with drummer in the back / Setlist signed + invit

After the show we had a nice chat with him , he was nice to everyone.
he's playing the Maroquinerie on Feb 25th don't miss this gig.
Sorry no live pics but here's a video from Jools Holland show from England.
© Guino Patrice
Publié par Angelo Misterioso à l'adresse 6:09:00 PM