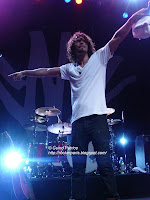 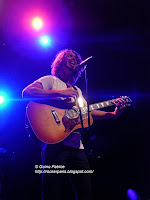 Nice to see Chris Cornell back in Paris after his gig was cancelled last June.
He did a set at the trendy night club the Showcase in 2007 and he was smoking , playing a Best of... his whole career .
Unfortunately tonight things are very different , he's here to promote his shitty new cd produced by Timbaland and tonight's concert consisted of his WHOLE new cd.
No need to tell you that the first 45 min were complete crap , lots of backing tapes , loops and samples.
We were several wondering ( including me & Patrice Guino , our fellow photographer) if he was really singing live , i honestly think that for most of it he wasn't.
He played a bit of acoustic guitar but it seemed it wasn't plugged.
Come on Chris ! What happened to ya ! 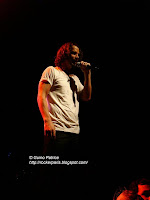 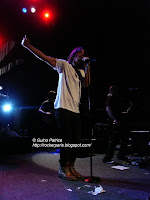 Second part of the show( which was brilliant ) was introduced with the James Bond Theme " you know my name " and then the show really started playing Soundgarden' s " Rusty Cage " , "Outshined" and " Loud Love" + others including a great version of Temple of Dog 's " hunger strike " .

Shame that Chris Cornell has become such a joke !!!

There was suposed to be a meeting with competition winners that was cancelled because Chris left the venue straight after the gig. Nice ! 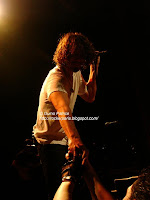 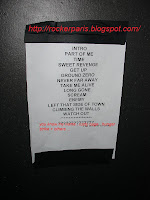