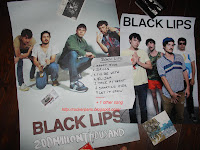 Live recording for Canal+ TV show " L ' album de la semaine " in front of 150 people .
Lots of fans are here tonight so the atmosphere is really cool with many people screaming.
Funny guys , the guitar player is dressed with a poncho and a huge hat and the drummer wears the french football team tee-shirt of St Etienne. The guitar player ( the one with the poncho ) is spitting in the air and catch his saliva back into his mouth. Nice !
Musically they're a bit wild sounding like a 60's garage band. They do share the lead vocals duties between the drummer , the Poncho man and the bass player who's singing most of the songs.
Lots of energy but they should sometimes focus on the way they're playing as they're singing often out of key , same with the guitars.
Nevertheless is was Fun.
Some posters were given on our way out .