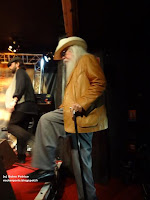 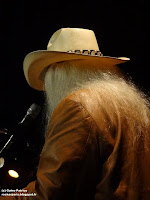 I can't tell you if Leon Russell has already played in Paris before, maybe in the 60's or 70's so tonight's show at the tiny jazz club New morning is a "must see".

French female singer Jain is opening on acoustic guitar, sounds like Selah Sue to me, enjoyable. 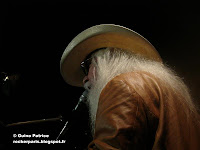 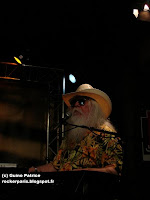 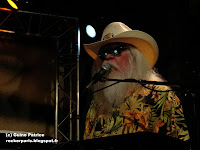 Leon Russell arrived @ the New morning in a wheelchair but get on the stage with his cane to sit down behind his keyboard for the whole of his 90 min set.
White long hair and beard , sunglasses white cowboy hat and brown leather jacket: cool look.
Maybe his "hawaiian" shirt with the big flowers is not up to the standard ;-)
Anyway we heard some of his most well-known songs tonight and many covers from other bands
setlist included : Delta lady, Rollin in my sweet, stranger in a strange..., sweet little angel, lady blue, kansas city woman, takes a train, let the good times roll, hard rain, I've just seen a face, lucky ol' sun, song for you, a medley of jumping jack flash-papa was a rolling stone-kansas city (here on video) and a few others.
The voice is a bit frail but the piano playing is intact some of the songs were re-arranged like the up-tempo version of The Rolling Stones' "Wild Horses". 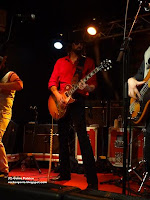 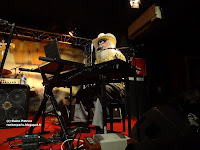 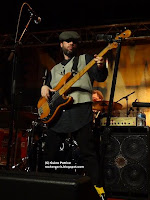 I would have prefer more of his songs and less covers but I guess that he's more well known for his contribution for other artists he worked with than for his repertoire even though he had huge hits with his own songs.
Very good show, better than expected. 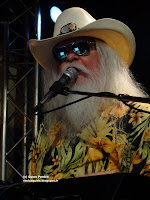 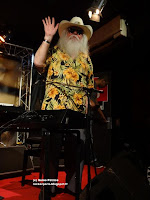 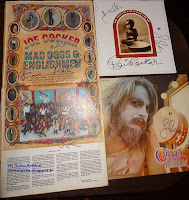 signed by the Master