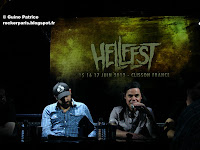 They did tell us a few things:
-OZZY will play with Slash & Zak Wylde
-It's a 35 000 capacity maximum every day
-It's a new site a few yards from the original
-6 stages
-No photographers will be allowed for Motley Crue ( same as 2 years ago)
-They are "expecting" Guns N Roses to be late
-Van Halen should have headlined (They were in contact with them for a few months before the band decided to play only the US)
-They would like to have Iron Maiden, but not in the near future as they will be headlining Sonisphere next year ( A scoop ?!?)
Publié par Angelo Misterioso à l'adresse 4:04:00 PM