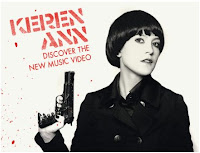 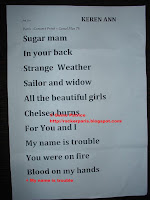 Keren Ann is promoting her new album and is having an international career playing all over the world , she's singing in perfect English, her music is influenced by Englo-American music. (that's probably why she has an international career: cqfd).
Many people over here think that she's french, her french is perfect, but she's in fact from Holland, born in Israel.
Large band: as usual drums, bass, guitar, keys + 4 guys on violin & cello & Keren on vocals, acoustic & electric guitar.
Her music is a kind of cool pop-folk, tonight we're lucky as she's not only playing songs from the new album ( That's the rule here) but also a few oldies and the show is longer than what other bands are doing @ L'Album de la semaine.
Very sophisticated pop-folk songs, great songwriting and soft clear high voice.
We only had two "UFO" songs : one with a rapper (?!?) and her latest single " My name is trouble" which sounds like 80's electro -pop with a very disco sounding bass.
Considering her repertoire , we really wonder what this song is doing here and why it is the single, the video is funny though.
Very good show. We like her a lot @ Rockerparis.
Publié par Angelo Misterioso à l'adresse 11:11:00 PM