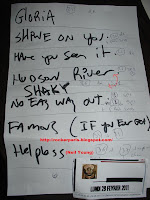 New York state Folk-Soul-Rockers The Duke & The King are playing famous Canal+ TV Show.
We heard briefly their music before going there so we knew what to expect and we were not disappointed at all.
3 guys exchanging theirs instruments for each song and one girl on guitar and violin and all singing lead vocals.
The main singer is having a lot of fun as he's completely waysted on Armagnac (He's mixing it with water ! only americans can do that).
Their music is strongly influenced by Folk rock legends CSN ( Crosby Stills & Nash) & Neil Young (both acoustic & electric) or the early America.
The guys are making you feel confortable as if they were playing in your living room.
Between songs we had a couple of lines from Tina Turner's "We don't need another hero" from the Mad Max movie & Beasty Boys' "Fight for your right". Remember the main singer is a bit... drunk.
They all have perfect voices including the girl with her Rickie lee Jones' high & clear voice.
I thought there would be more soul influences into their music after listening to songs on their myspace but that's allright their were SO GOOD we didn't miss that.

Probably one of the best session we had for a long time @ L'Album de la Semaine.
And a pleasure to discover such a great band.
Publié par Angelo Misterioso à l'adresse 1:21:00 PM