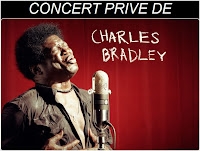 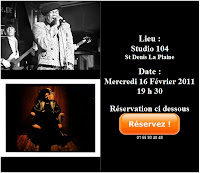 At the age of 62, Charles Bradley is releasing his first album.
He's here tonight to promote it with a small gig in the Studio 104 of Plaine St Denis for the famous Canal+ tv show L'Album de la Semaine.
Charles probably listened to Mr James Brown a lot, he can't dance like Mr Brown, nobody can't dance like him, even if he tried to, but the voice is pretty amazing.
It's very powerfull and when you close your eyes it sounds like James, sorry... Mr Brown is in da house.
Very cool & groovy 9 songs set.
I've already seen the musicians that are playing with him, maybe they're the same as Lee Fields, who already played at L'Album de la Semaine a few months ago, and with whom Charles Bradley is playing tomorrow night ( Feb 17) @ Maroquinerie club in Paris
Publié par Angelo Misterioso à l'adresse 12:10:00 PM