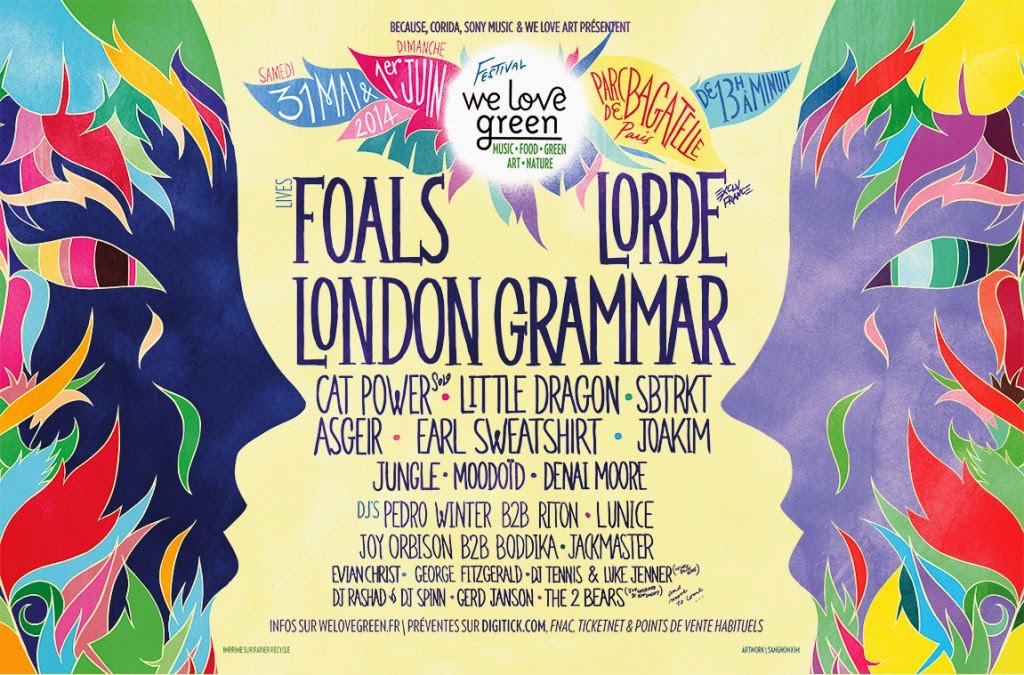 Saturday is sold-out for the very bourgeois festival in the Bois de Boulogne, It's even more posh than the Rock en Seine Festival with lots of beautiful girls in their late teens dressed up for the occasion.
We arrived on the site around 5:30 pm, Chan was playing @ 6:10pm.
Never seen so many people at this Festival, it used to be relaxed but not that much anymore, hard to believe it's sold-out considering the bill, apart from Cat Power there's nothing really interesting evn though London Grammar is allright and the singer's cute.
Cat Power solo on guitar or piano
Was a bit scared for Chan Marshall before the show,  alone on this huge stage in daylight at a Festival, It could have been a nightmare for her. In fact it wasn't.

You could hear a pin drop while she was playing.
Everybody, I Mean EVERYBODY listened to the music religiously...
As usual she seemed a bit freil and on the edge but she did a very nice show mainly on the guitar then she played a few songs on the pianon and then back on the guitar for a couple of songs before saying  goodbye and throwing flowers into the audience.

The audience welcomed her with opened arms. 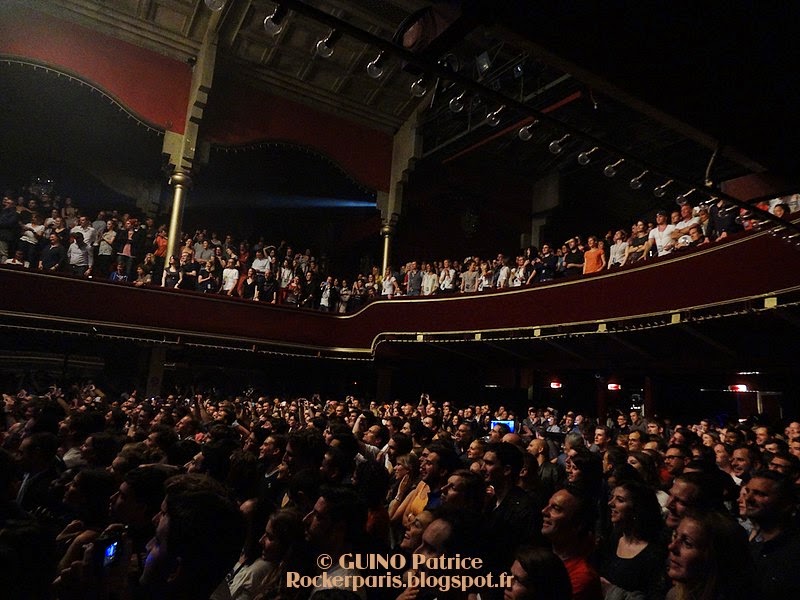 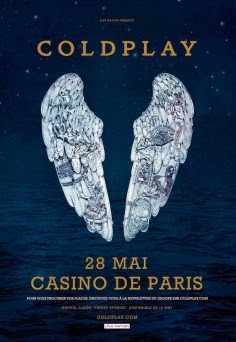 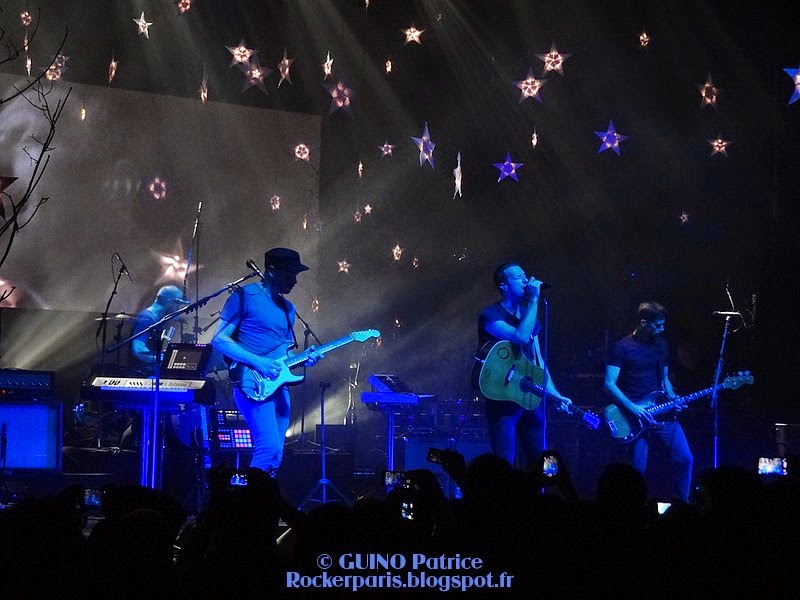 The gig of the year for many as COLDPLAY is filling up stadiums even in France and is playing a "club " show tonight in Paris.
Prices were silly, up to 90 Euros and even 180 Euros for a special pack (priority entry).
Can you believe this ?  Those bastards  are charging twice the price to get into the venue first, there were 150 people in Paris. Of course French security fucked it up...anyway !
Coldplay knows how to squeeze the lemon of their dedicated fans !!! 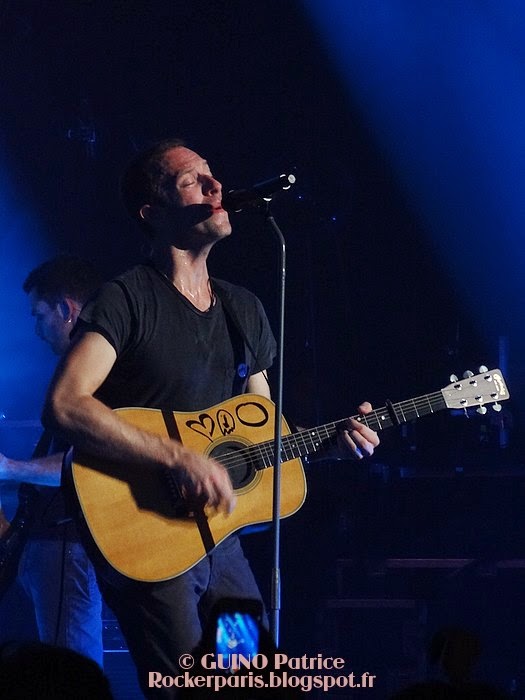 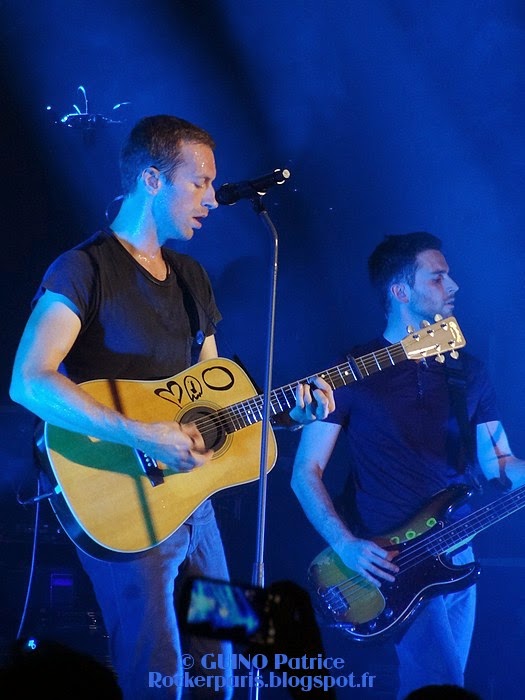 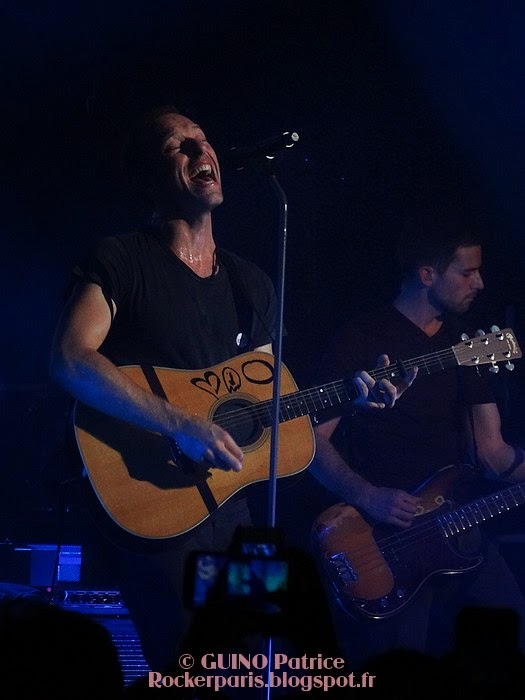 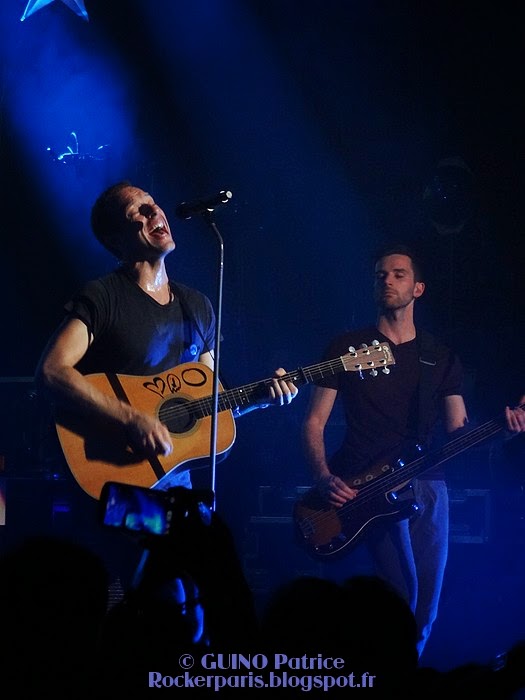 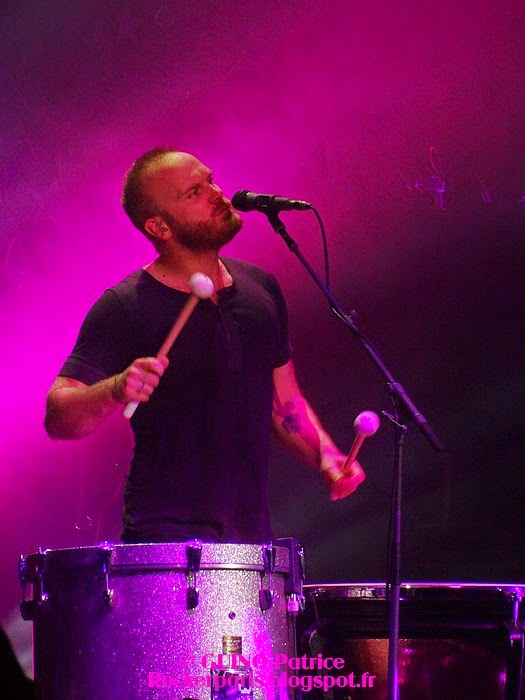 Lots of guests and the theater is packed downstairs and upstairs and it's hot as hell and the band is not even on stage.
Stage is beautiful with a huge screen in the back , one tree on each side of the stage and lots of stars hanging from the ceilings for a nice effect.
First song is a very slow one (see video below) than the band is getting heavier to get the audience dancing and jumping up and down with their arms up in the air,  yes,  Coldplay fans can do all this at the same time.
Lots of songs sounding like U2 with lots of ooohhs and Aaahs to sing along, only 4 guys on stage but it sounds like there are 12.
Lots of effects and beautiful lightshow, though a bit dark and lasers, the kind of things you'd expect in a stadium. 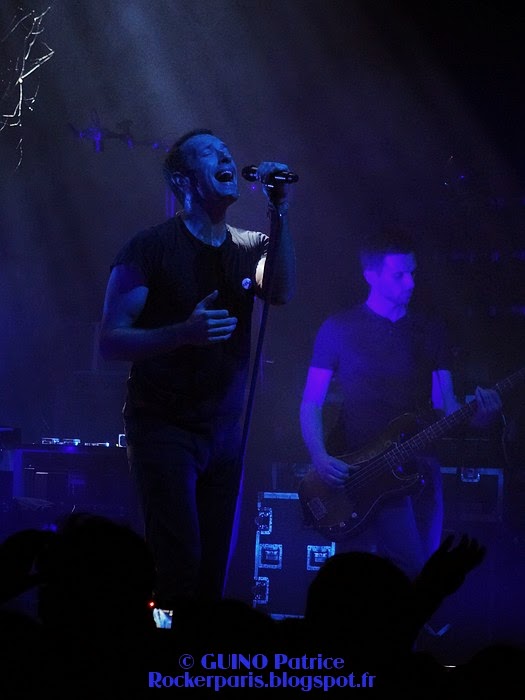 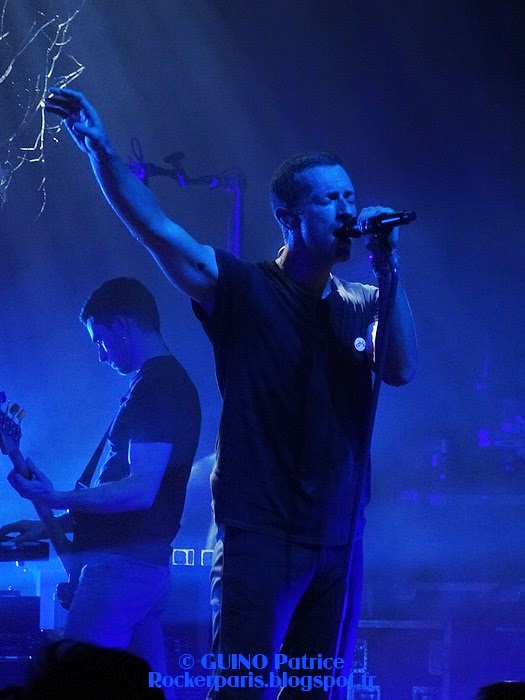 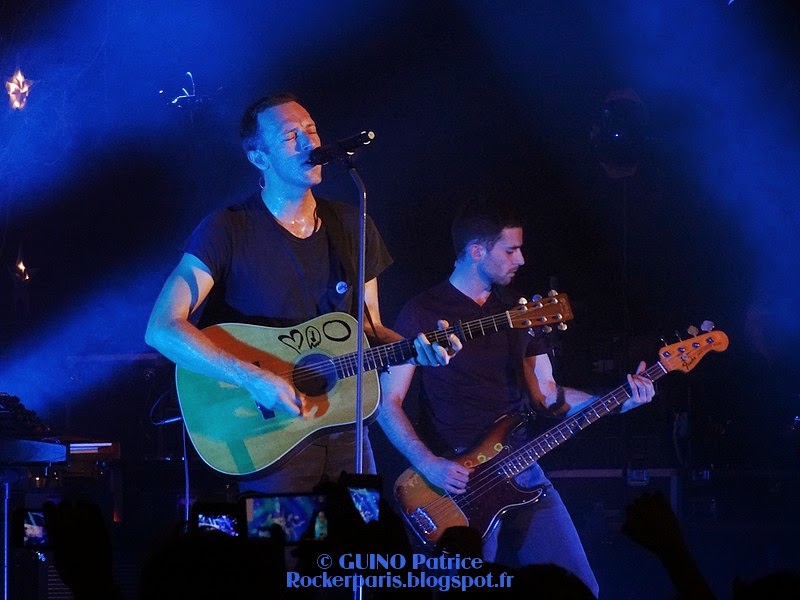 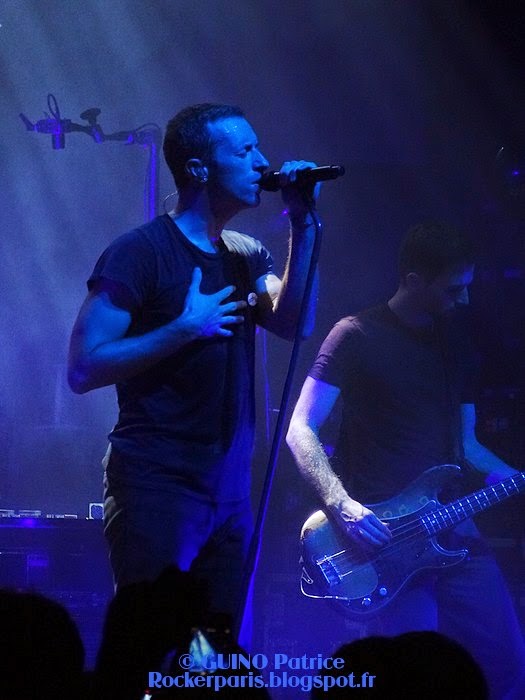 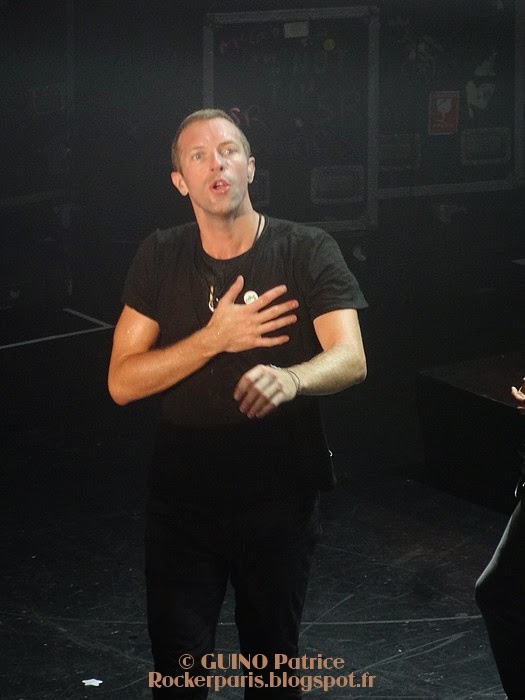 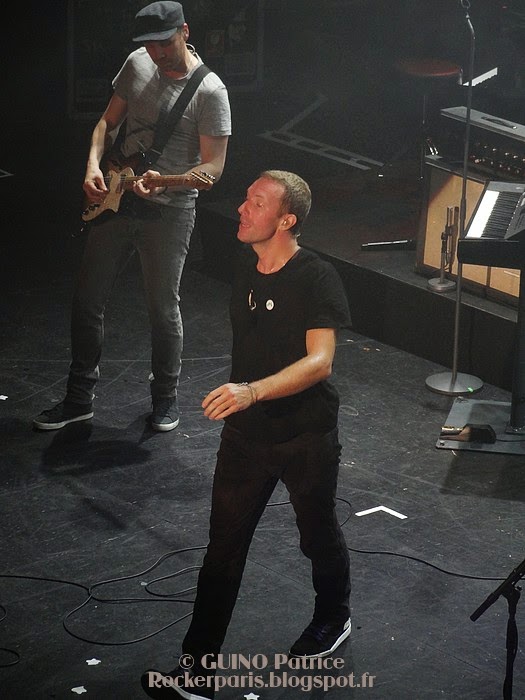 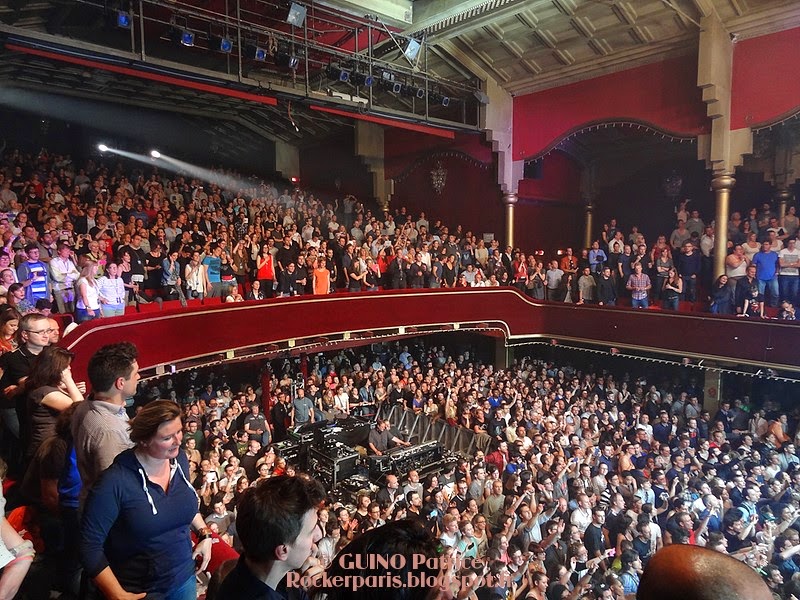 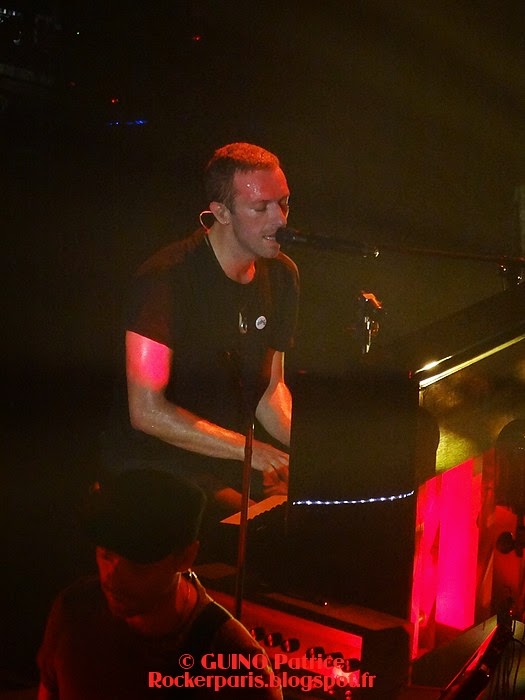 Of course Chris Martin is getting all the lights and is doing the show , speaking in French to the delight of his fans, you can't take it away from him, the guy is a showman.
Hard to believe that so many people are attracted to this very average band, you could get rid of the three guys and keep the singer nobody will noticed anything.
A bit like the Bay City Rollers who were filling up stadiums in their time, nobody will remember Coldplay, 10 years after they're done.
Perfect concert to invite a young girl you want to go out with, who's listening to crap on the radio and thinks she's cool.
Music-wise it's void ! 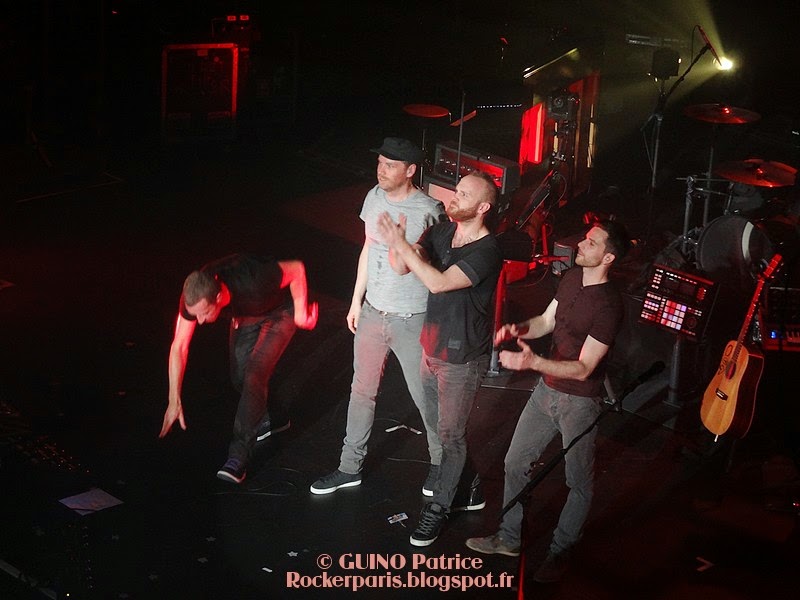 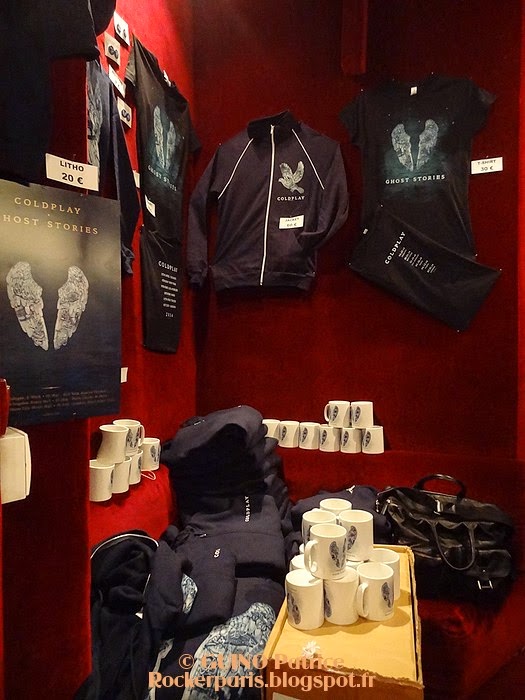 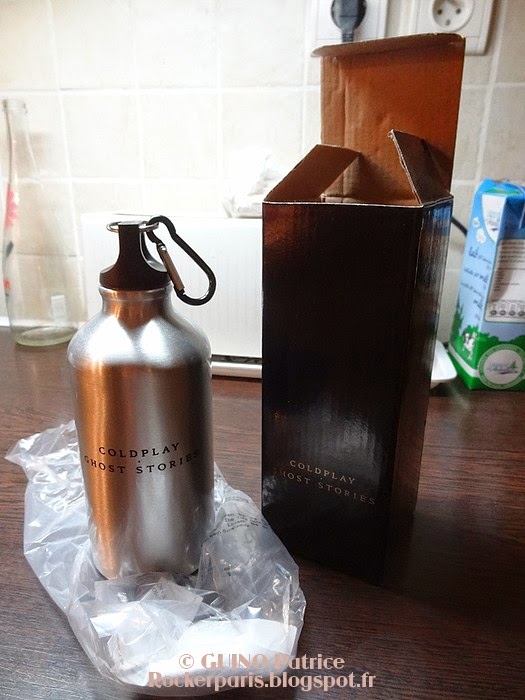 Merchandising and goodies we get on our way out 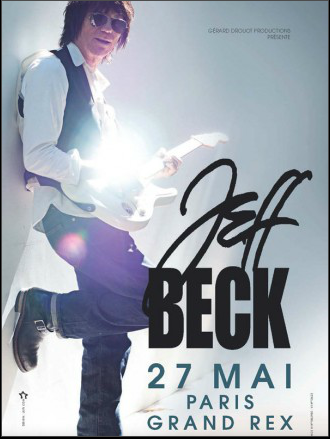 
After the horrible concert by Prog band YES, we're back at the very beautiful Grand Rex theater. Less than a week ago JIMMY PAGE was at the Olympia theater for a Q&A. Tonight we spend the evening with another Yardbirds guitar player: Jeff Beck
At age 70, he's still very innovative and his guitar playing is faultless and with a virtuosity that even young guitar player can hardly achieve.
The set is only instrumental with only two songs with a vocalist "Why give it away" and the blues one "Rumblin and Tumblin" (see setlist for details)
I'm not too familiar with his repertoire but Billy Cobham' s "Stratus", Hendrix' "Little Wing" and final song The Beatles' " A day in the Life" where fantastic ( see video below).
JEFF BECK is incredible on guitar
Each musician had a short solo at one moment during the gig, needless to tell you musicianship was very high, Rhonda Smith on bass was amazing.
Great set 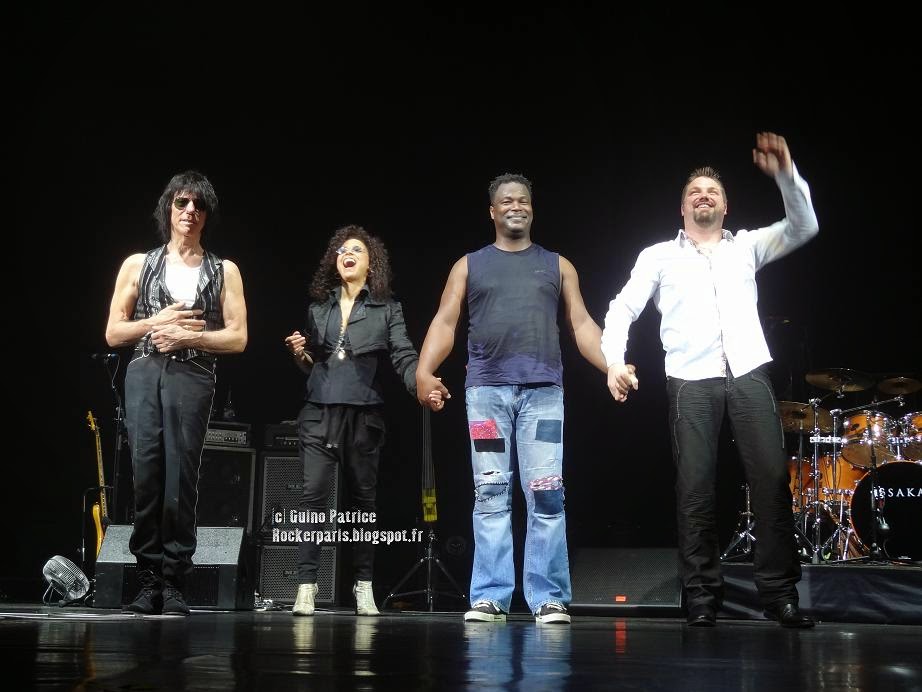