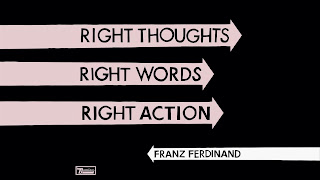 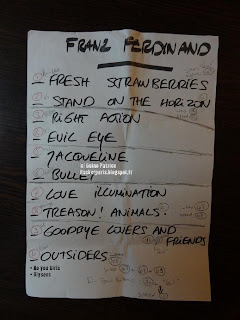 The band is back in Paris to play songs from the new album "Right Thoughts, Right Words, Right Action".
It sounds more pop and less rock than what they've already done. Hard to make our mind after just one listen and in live conditions, even though I've heard some very good reviews for the new album after the disappointment of the previous one.
FF is a bit like Kaiser Chiefs, you need to see them on stage with a wild audience to really appreciate them which is more difficult when playing a tv show like this one.
Lots of girls tonight around us, the band still has some sexy supporters.
Very good gig ( one hour with two extra songs as an encore.)

Arctic Monkeys are playing on Sept 11 and  Placebo should play around the Sept 18 (tbc)
Publié par Angelo Misterioso à l'adresse 10:34:00 AM