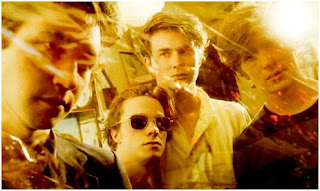 Another new sensation for 2013, after Jake Bugg this is Palma Violets. We were less than impressed by Jake Bugg, who's overrated. Palma Violets don't have rave reviews everywhere like Jake but these English guys know how to Rock, they have some short psyche-garage rock songs and are giving it all on stage specially the drummer and bass player.
Can't say that they have some great catchy songs but they are rocking like mad and are having a good time on stage and that's what we like.
Can't wait to see them perform in front of a "real audience" with everyone jumping up and down, slamming and  stage diving.

Their first album "180" should be out next month.