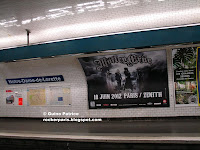 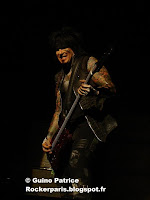 Great American Show with Girls, roller Coaster...and great lightning !
Setlist is fantastic, I would have add a couple of songs from "Generation Swine" which is a very under-rated record.

Can you believe it ? This is the first time ever that we're seeing the Crüe Live.
Each time they've played in Paris or I couldn't go, or I wasn't in Paris or they've cancelled.
Nice stage with the Roller Coaster in the back, lots of projections on the screen that's within the tracks of it and a great and bright lightning.
Down the front the sound is OK but in the stalls it's so loud that it is almost unbearable.
Nikki on the left not moving too much, Vince Neil jumping and dancing like a frog with the voice of a duck on helium, Mick Mars despite his disease is playing his parts but he's never been a great guitar player, Respect as he can barely walk and looks very frail.
The band has two girls for the backing vocals and some dancing but they were useless, at least for the vocals as the backing vocals were all on pre-recorded tapes.
The setlist is a best of... with a couple of "new" songs (see complete setlist for details).
The highlight of the show is of course the "Drum solo" which is not really one, it's more Tommy Lee playing simple rhythms on an electro soundtrack with Jean-Claude guesting in the back seat for a tour upside down.
Nikki noticed two girls down the front and had them on the stage for some dancing and a fail attempt to translate something he wanted to tell the audience.
They only played 90 min without any encore which was a bit of a letdown.
Overall (very) Good show.But why was it so loud ?!? 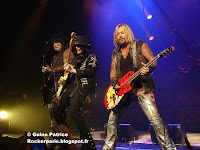 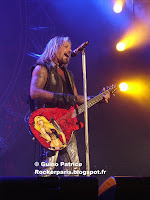 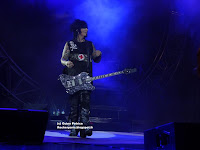 Nikki Sixx is taking it Cooool !
Vince Neil is singing like a duck on Helium
Mick Mars... well it's Mick Mars, the poor guy is sick but still can manage.
Tommy Lee on top 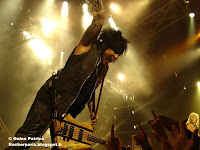 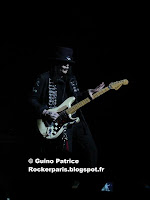 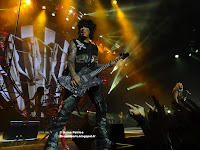 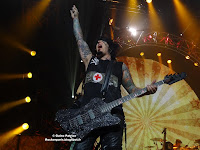 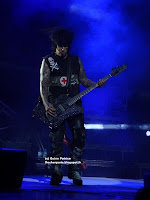 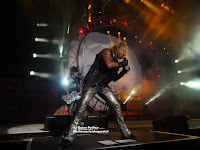 sorry for the sound