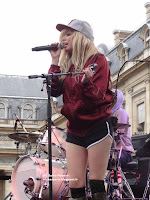 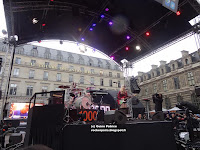 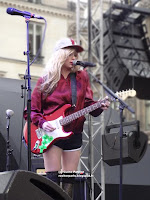 Another free show in Paris ,on the first come first serve basis, this time just sandwiched between the Conseil d'Etat & the Louvre Museum on Place du Palais Royal. 1500 capacity.
it's not sold out as it's oudoor and the weathear has been awful all day with lots of wind and showers. Luckily it's dry when The Ting Tings are getting on the tiny stage.
This gig is part of the Rock Corps thing, when you volunteer for some work you get a free ticket for a rock concert.
We've seen them a few times recently @ Cigale in March, @ L'Album de la Semaine in January and @ Caroussel du Louvre last december where they premiered the new album.

I guess they're playing the same setlist as they ended the set with the same routine: an electro song then their two hits "Shut up & le me go" & "That's not my name" but with had something extra as there were 3 other stages facing the main stage with a Gospel Choir of black female girls all dressed up with XVIII century clothes and wigs on the first one, some dancers on the second one (see picture below) and a extra guitar player dressed up as an astronaut on the 3rd stage.
All that added an extra flavour to the electro-bluesy pop-rock of the Ting Tings.
Cool 30 min set. 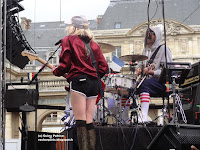 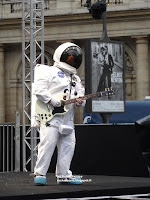 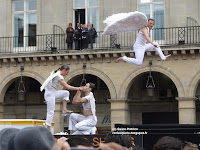