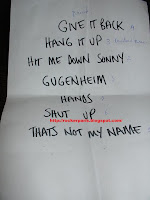 The Ting Tings are back in Paris, a month after playing a private show for Deezer @ Caroussel du Louvre, to promote their new album "Sounds from nowheresville" to be out at the end of February.
In front of a selected audience of less than 150 people The Ting Tings are playing songs from the new album a mix of bluesy rock electro hip-hop.
Still playing as a duet with lots of pre-recorded tapes, the girl is doing the show singing-jumping & dancing .
Lively short set, not too sure about their completely electro song "Hands" that should sound perfect in a disco but not on a stage, well not for us a s we hate that electro shit.
The band ended their short set with 2 hits from the first album.
Very good set.
Check our review of their private show @ Caroussel du louvre on Dec 08 2011