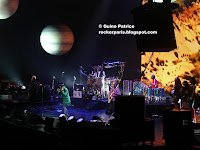 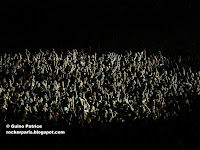 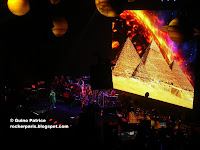 My first show on this tour , they've already played a sold-out show a few months ago @ Paris Bercy, this time it's not officially sold-out but the pit downstairs is rammed and it's hard to find a seat in the stalls.
We already saw them @ The Olympia for a small private show in March (link to review below) and the band was smoking.
We had to endure a DJ as support, the end of his set was welcomed. 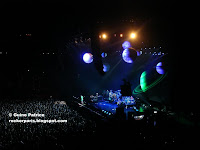 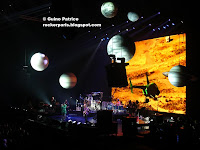 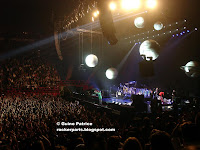 For Jamiroquai the stage is simple but beautiful with a huge screen in the back playing lots of very bright a nd colourful images and movies, and some planets hanging from the ceiling.
Jay is dressed with a green jacket and is still dancing a doing his little moves maybe not as much as a few years ago and the voice is perfect.
He complained a bit to his sound engineer for the sound in his monitors but we're used to that.
Technically and soundwise the show was perfect, these guys know how to play & groove.
A 2 hour show without any breaks as songs are played one after another maybe some of them are sounding a bit the same in the end but an overall very good show.
They've modified the arrangements on some songs and they added a few extras at the end.
Groovy gig