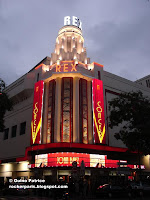 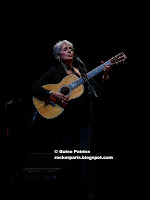 Joan Baez has never been so popular in France, that's her fourth and last show @ Grand Rex (two shows in June and yesterday & Today) all sold out. 10 000 people in all.
She played last month @ Fête de L'Humanité in front of more than 50 000 people.
She also did a few shows in France.

Last time we saw her, was @ Palais des Congres in 2008.
At the time she was playing with a full band, tonight there's just a banjo player , who's also playing acoustic bass and piano.
When you have good songs like she does, an acoustic guitar is enough, you don't need much.
Suzanne Vega is doing the same and her gigs ( @ Alhambra in 2008 & Théatre Marigny in 2010 ) are just great. 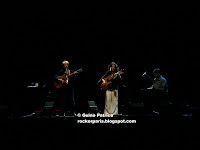 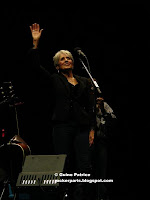 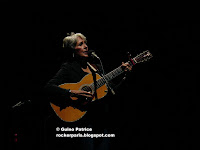 She started the gig on her own , center stage with her acoustic guitar, sound is perfect: clear and not loud at all and the lightshow is minimal.
She's playing most of her hits, covers of Leonard Cohen, Bob Dylan... check setlist for details.
She's joined on a couple of songs by Marianne Aya Omac for a couple of Spanish songs which had the audience singing some "OOOOOlllléééééééééééé".
She (Marianne) has a great voice and the Spanish-style guitar playing is stunning but you really wonder what she was doing here. 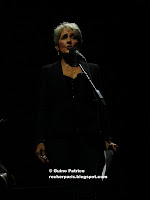 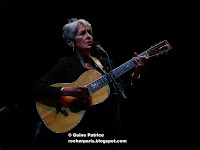 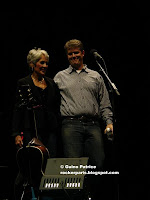 Joan Baez took the time and made the effort to introduce many of the songs in fluent French even.
She did "le Deserteur" in French without guitar and played a John Lennon cover.
Of course most if not all songs were political.

Great gig, Great conditions to attend such a gig, confortably seated in the sofas of the Grand Rex.

See ya there on sunday afternoon for the Première of the Martin Scorsese documentary on George Harrison : " Living in a Material World", Olivia will attend. 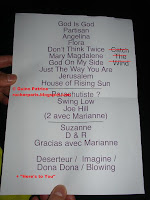 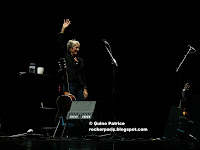 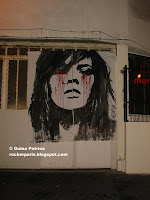 There was a vernissage tonight @ Galerie Moretti between Bastille & Place des Vosges for Konny Steding, we arrived there after the war, everything was closed.
Only was left her painting on the door.
It's open from tuesday to sunday from Oct 13 to Nov 19.
"Here's to You":