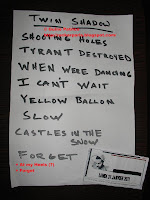 Twin Shadow @ Canal+ to promote their album "Forget".
They've already played the Point Ephémere last october (Oct 29) so i don't know why the colourful , for his nice shirt, singer George Lewis Jr is saying that's their first gig in Paris.
They will play an already sold-out Nouveau Casino in a couple of days.
Very cool 80's pop new-wave. The kind of music we hated when we were kids but I have to say it was very enjoyable.
80's revival even for the clothes they're wearing, they do have a very sexy female keyboard player and the singer has a funny haircut and even more funny he's looking like the hidden child of Phil Lynott (from Thin Lizzy fame).