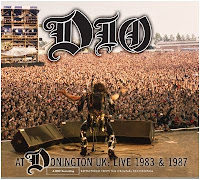 The set will be released as a deluxe digipak including a booklet filled with rare photographs and liner notes, and original replica all-access laminates from both shows.
Ronnie was the executive producer on the Donington project, and was very much looking forward to the release.

Other releases should follow :a deluxe limited edition picture disc of Dio's classic solo debut, "Holy Diver", and "Bitten By The Beast" from David "Rock" Feinstein. Some others next year including a box set with vinyls "The Complete Dio Vinyl Collection".
More news for what's to come on the official DIO site ( in the news section, scroll down).

In other (sad) news Toni Iommi had his red Gibson guitar stolen @ High Voltage Fest in London on July 14th, here's the Pic above.