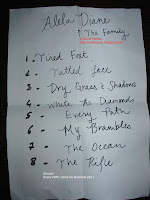 Alela Diane is still in Paris for some promotion , this time she's playing the famous Canal+ tv show " L' Album de la semaine" in front of 200 people.
It's packed tonight.
Same entrance as a few days ago at the Bataclan ( see review pics and video HERE ).
First song with only the backing vocalist girl and her father on acoustic guitar ( he will play several guitars from acoustic to electric during the set including a bit of Dobro ) then for the second song the bass player is joining in and then the drummer for the third.
She's here to promote her new cd " to be still" but she's opening her set with an 'old' song from " The Pirate's gospel" [2007] ( she'll end it with another one from the same record).
Once again she did a fine gig , I like her soft voice and the bass player is funny to watch as if someone had put a couple of lizards in his trousers LOL

She also played a private show @ The Salle de Billard of the Olympia Theatre in Paris yesterday ( Capacity 300 ) , sorry I didn't go, It was a long & lazy week-end for me.