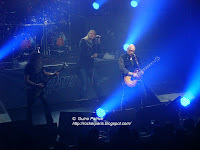 Can't remember last time i went to a Heavy Metal gig , can't consider Motorhead a heavy Metal band well anyway ...
Not that many people tonight the balcony is closed and so are the aisles on both sides of the pit downstairs.
So there are far less than a 1000 heavy metal "kids" who are more, in fact , in their 40's .

Iced Earth "opened" for this co-headlining show , after just a minute now i remember why i don't listen to Heavy Metal anymore : it is sooo boring and full of clichés.
The look is ridiculous , the attitude is ridiculous , the title songs are ridiculous and so on ...
Completely indigest music and absolutely ridiculous band .
Please give me my shot of Judas Priest !

Then we have SAXON , with Iron Maiden and Def Leppard they are the only survivors of the New Wave of British Heavy Metal ( which started around 1979 ) and the least succesfull. Their glory days are far behind them.
It's hard for old bands to keep up with new bands ; so Saxon , for the last few years , is trying to be more heavy than younger bands and unfortunately it doesn't work at all , they're as boring as those younger bands .
I mean who wants to hear any new songs by Saxon ( valid with Iron Maiden too ) ?
But there's one territory where they can't be beaten up is when they play the Classics and they have lot's of 'em . And i'm 15 again : " Dallas 1 pm " " Princess of the dawn " " Crusader " ...
Too bad they only played for a little more than an hour ( first encore after 45 min !!! ) when we had to endure Bored Earth for almost 90 min.
Great lightshow too 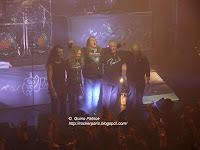 One of the Classics :
Publié par Angelo Misterioso à l'adresse 12:14:00 AM