The Counting Crows are back in Paris after a long absence.
This time they're playing the Bataclan ( 1200 capacity ). The weather has been sunny and warm in Paris these last few days and in this case it's a nightmare to go and see a band in this theatre as the air conditioning is just too bad .
It's been like this for years no exception tonight it's hot as hell.

The show is supposed to be sold-out but there are still plenty of empty seats at the balcony.

As usual they're starting the gig with a slow song before really kicking it off.
The band has always been 'relax' on stage only the singer Adam lives his lyrics to the full even if he's fighting food poisoning since this morning .
They're hot ( especially tonight ;-) with heavier songs unfortunately there are too many mid-tempo songs in their repertoire to offer a real excitement which are, fortunately played perfectly ; remember they are 6 musicians plus a singer on the tiny stage. 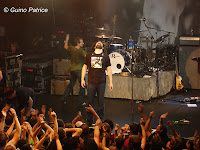 Songs included "Mr Jones" , "Hangingaround" , Joni Mitchell 's "Big yellow taxi" and last song " holyday is spain " after receiving from a fan a Spanish football t-shirt even if Adam didn't noticed its nationality.
Shame on you Man they're the Euro champion 2008 !!!

FOR MORE VIDEOS FROM THE BATACLAN GO TO :
http://fr.youtube.com/user/rockingparis